This interview was originally featured in Tech For Equity Updates—a biweekly newsletter about Change Machine’s platform, including upcoming trainings, and insights from our community of practice. Subscribe today! 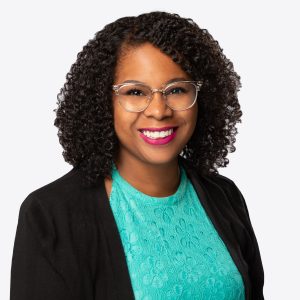 As we celebrate Black Business Month in August, we’re excited to highlight Black-owned neobank, First Boulevard. Our readers may recall this bank launching on Juneteenth when we announced this news in our Tech For Equity Updates in June 2021.

Today we feature Brittany Canty, Vice President of Product at First Boulevard, who speaks on the persistent racial wealth gap and the role of Black and Brown-led fintechs. Brittany is a trailblazing, patented Product Manager Leader in her field! Brittany has built her own company and led product and development teams across multiple brands including Braintree/PayPal, Redbox, and SpotHero before playing a critical role in First Boulevard’s launch.

Tell us more about the founding of First Boulevard.

Donald Hawkins and Asya Bradley, First Boulevard’s founders, devoted themselves to creating this neobank in reaction to George Floyd’s murder, wanting to be a part of the solution in a definitive way. “Boulevard” is a wide street where there’s room for everyone. Even though we are focused on the Black community, it’s for anyone who feels the same struggles, has a distrust in the banking industry, and has been systemically overlooked. We’re solving all these problems, a lot of which is felt by Black people and the Black diaspora every single day.

One of our biggest differentiators is the fact that the entire company is made up of our audience on all levels. As opposed to some places that can have diversity in the lower ranks, we have it from top to bottom. Two-thirds of our leadership team is female, two-thirds of our team is Black, and 85-90% is BIPOC. We really know who we’re building this product for. We live it and breathe it every day because we are also our users.

One of our biggest differentiators is the fact that the entire company is made up of our audience on all levels. As opposed to some places that can have diversity in the lower ranks, we have it from top to bottom.

This is more than just a company to us. I worked three months without a paycheck because I was about this mission, but it’s worth the investment. We didn’t just build a product for a deserving population, but we also created a different type of company that I’ve never seen before. We created a tech company in an environment that is also breaking barriers when it comes to culture and removing a lot of the toxicity that is perpetuated in corporate America. So you don’t have to choose between supporting a mission that is important to you and working in an environment that supports you along the way.​​

How do fintechs like First Boulevard help in closing the racial wealth gap?

We have customers go along this journey from debtor to legacy builder. We’re looking to help you as an individual, because we know that you as an individual are going to help your family and your community. Along the way it’s really focused on the systemic issues that this community faces. I have seen that generational growth, and they’re passing that along to other people in their family and their future.

What do you think about the presence of our platform’s recommendation engine that serves to highlight fintechs which are primarily led by Black and Brown founders?

We have a whole Black business directory where we want to essentially do the same exact thing: bring awareness to companies that our population may not be aware of. The only way to push that is to get it in front of the right folks. Then we’ll start to get that viralness when you share it with 10 of your people, and they share it with 10 of their people. That’s how we start to get that grassroots movement to make impactful changes.

Nancy Williams on Centering Black and Brown Voices Within Our Work